Finally, the three Space Sheriffs Gavan, Sharivan and Shaider team up to defeat evil once and for all. 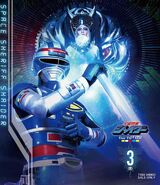