View source
watch 01:36
We're Getting Mutants in the MCU - The Loop
Do you like this video?
Play Sound

In light of recent failures against Gavan, San Dorva and Witch Kiba try several new tactics in order to defeat Gavan. There latest trap involves a strange building where the walls supposedly eat people. To make matters worse, Kojiro, Wakaba, and Yoichi decide to investigate the weird building as well. Can Gavan save his friends? Or will become the building’s next victim? 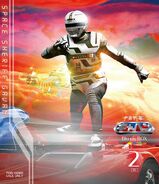