Metal Heroes Wiki
Register
Don't have an account?
Sign In
Advertisement
in: Uchuu Keiji Sharivan, Disambiguations, Metal Heroes with more than one identity,
and 2 more

This article is a disambiguation page for Space Sheriff Sharivan

The following is a list of links to pages that might share the same title.
Please follow one of the disambiguation links below or search to find the page you were looking for if it is not listed. If an internal link led you here, you may wish to change the link to point directly to the intended article. 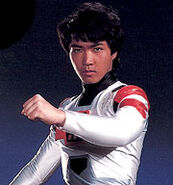 Sekisha Process is what Den uses to transform into Sharivan. When Sharivan transforms with the command Sekisha (赤射, Sekisha?), the Grand Birth envelops him with Solar Metal particles that it absorbs from solar flares to form his armor within milliseconds.

Sword hidden in a compartment on the left hip Sharivan.

harivan jumps before performing a scissors movement with his legs to carry two kicks after hit or two opponents at once.

Sharivan plunges his opponent spinning on itself before giving him a punch.

Sharivan hits his opponent with the elbow.

Sharivan jumps before hitting his opponent with his fist.

Sharivan jumps before wearing a collar around the neck of his opponent.

As Sharivan, he uses the Laser Blade sword in his signature move Sharivan Crash to strike the opponent. Sharivan uses Prism Goggles to clearly see the object. It is a rectangular yellow glasses with crystal particles.

released as part of the Ranger Keys Metal Hero Edition in Bandai Premium. It is unknown if it will appear in a future crossover. Of course as with all Ranger Keys, should it exist, it would be able to transform

one, i.e. one of the Gokaigers