The Neo Guild (ネオギルド, Neo Girudo?) is the successor to the Guild. Like their predecessor, they also seek to eradicate humankind and create a world ruled by robots.

George Makabe (ジョージ真壁, Jōji Makabe?): The head of the renegade robot organization the Neo Guild. He is actually a human, but Janperson thought that he was a cyborg like his elder brother, Ben Fujinami. He vowed to mechanize the world, after he and his elder brother Ben lost their first android assistant, when they were kids. When Ben (as a cyborg) was "killed" by Janperson in the early part of the series, he reformed the Neo Guild into a stronger organization, vowing to destroy Janperson and rule the planet. Near the end of the series, he was revealed to be just a human with mechanical implants (unlike his elder brother Ben who became a full cyborg). Rather than submit to death, at the hands of the heroes, he chose to commit suicide.

In their conquest for world domination, the Neo Guild would bolster their forces with robots to either infiltrate humanity or destroy Janperson.

Omega DX (オメガDX, Omega Di Ekkusu?) is a killer robot specifically created to combat Janperson. The Neo Guild analyzed Janperson's known abilities and programmed countermeasures into Omega DX. Fortunately, Janperson unveiled the Acr Fire and Jan Blader, weapons that the Neo Guild did not have any data for. The Omega DX was destroyed by a slash of the Jan Blader.

Falcon 13 (ファルコン13, Farukon Sātīn?) a robot who masqueraded as a scientist named Tsuyoshi Kinameri (木滑剛, Kinameri Tsuyoshi?). While in disguise, Kinameri performed operations to transfer brainwaves of dying humans into robot bodies, and disposing the originals. The Neo Guild planned to use the robots as sleeper agents and plant them in key locations to destroy the human race. Kinameri revealed his true Falcon 13 form when Janperson was closing in on one of their key sleeper agents. Falcon 13 was destroyed by a blast from both the Jan Vulcan and Jandetic.

Carla Takashima (カルーラ高島, Karūra Takashima?) is the insane masculine president of the SEEP Robot Company, a business that rents out SEEP robots to the public for labor and other menial tasks. She conspired with the Neo Guild to take over the world by using the SEEP robots to steal top secret information for the Neo Guild. However, Makabe severed ties with her when Carla bungled the mission by using Neo Guild troops to attack Janperson prematurely. Now on her own, she activated a protocol to make the SEEP units riot. Carla was revealed to be a robot herself and was destroyed by the Jan Blader.

SEEP #A38 (シープA38号, Shīpu A San Jū Hachi Gō?), affectionately nicknamed Kevin (ケビン, Kebin?), is one of 100 SEEP units created by the SEEP Robot Company. Kevin and his kind were unaware of their true purpose as sleeper agents for the Neo Guild. The robots were placed in key locations to steal valuable data to the unsuspecting human race. After a fallout between the company president and the Neo Guild, an evil command was issued to cause Kevin and the rest of the SEEP units to riot. Janperson shielded Kevin from the Carla's control and the both of them joined forces to stop her. With Carla destroyed and the SEEP robots peaceful again, Kevin was allowed to live in peace with his adopted family.

U2 (U2, Yū Tsū?) is an infiltration robot that planted bombs on Neo Guild targets. In a confrontation with Janperson, U2 was damaged and lost his memory. While attempting to repair himself, U2 befriended a young boy named Masahiko, who defended U2 when Janperson tried to apprehend him. Masahiko's kindness made U2 realize how evil Neo Guild's cause truly was and allowed Janperson to hack his damaged memories to find the latest bomb he planted. U2 was severely damaged beyond repair when he shielded Masahiko from Dollman's reanimated arm. U2 died wishing he had been built a hero instead of for evil.

Dollman (ドールマン, Dōruman?) is Neo Guild's latest assassin robot model assigned to destroy the lost U2. Dollman possess claws, eye missiles, and fierce hand-to-hand skills, making him a deadly opponent for Janperson. He was destroyed by the Jan Vulcan and Jandetic, except for one of his hands, which came back to life to finish off U2. Dollman's hand eventually self destructed.

R3 (R3号, Arū San Gō?) is a strongman-looking robot that was the first in a new line of Neo Guild robots capable of willpower. Makabe deduced that Janperson kept winning against the Neo Guild because of his undeterred resolve to protect the innocent. By giving R3 evil emotions and willpower, Makabe finally expected to defeat Janperson once and for all. In his first fight, Janperson's original MX-A1 program took over and beat R3 to near death. A blow to R3's head caused him to access positive emotions, forcing the Neo Guild to take corrective action. Each attempt to fix R3's brain caused R3 to cycle through different personalities including Florence Nightingale, Count Dracula, Tarzan, Toyama no Kin-san, Yuri Gagarin, Gavan, and ultimately a child. The personalities overwhelmed R3 causing him overload and self destruct.

Professor Tonda (頓田博士, Tonda Hakase?) is a scientist and one of a few human collaborators with the Neo Guild. Tonda developed a large spirit injection tool that would invigorate Neo Guild robots with willpower. His first robot, R3, was endowed with cruelty and hatred to ensure Neo Guild's triumph. However, R3's emotions went haywire, forcing Tonda to take his spirit injector into the field and correct R3's brain. But with each injection, R3 would develop a different personality. After R3 self destructed, Tonda attempted to attack Janperson with the spirit injector, but Janperson's inner demons emerged and almost killed him. Tonda was apprehended by the police as he was fleeing from Janperson.

Carol (キャロル, Kyaroru?) is female assassin robot with a rapier, and Gun Gibson's partner in crime. Though she was created by the Neo Guild, Carol is loyal to Gun Gibson first and foremost. By abetting Gun Gibson's desire to fight Janperson and ruining the Neo Guild's schemes, Makabe declared them traitors. Carol was caught in an explosion triggered by Makabe and damaged beyond repair. Her destruction led Gun Gibson to becoming an antihero.

Himuro (氷室, Himuro?) is a coldhearted warden of a prison facility designed to rehabilitate rogue robots. But in secret, Himuro had been conspiring with the Neo Guild to corrupt the robot prisoners. When Gun Gibson's actions threatened their scheme, Himuro personally stepped into the battle and revealed his true robot form. Himuro was destroyed by the Jandetic. 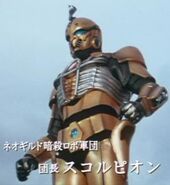 Himuro
Add a photo to this gallery
Retrieved from "https://metalheroes.fandom.com/wiki/Neo_Guild?oldid=34571"
Community content is available under CC-BY-SA unless otherwise noted.