In a departure from previous installments of the Metal Heroes Series, Tokkei Winspector did not feature any major villains, monsters, or an evil organization. Most episodes in the series featured human criminals committing realistic crimes as typically seen in police and crime dramas. Some criminals and/or their schemes that require suspension of disbelief have been noted. 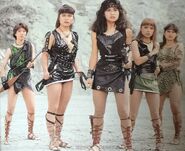 Satonaka
Add a photo to this gallery
Retrieved from "https://metalheroes.fandom.com/wiki/List_of_Criminals_in_Winspector?oldid=55109"
Community content is available under CC-BY-SA unless otherwise noted.