Golden Mask and Younger Sister: The Yacht Running Toward the Sun

When a Mysterious wave of thefts plague Europe and Japan, Gavan suspects that a myterious crime lord named Waro is behind it. Meanwhile, a masked man named Thief X has his own plans for Waro. Can Gavan thwart these foes? And who is working for Makuu? 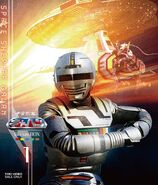 Gavan Blu-ray Volume 1
Add a photo to this gallery

Retrieved from "https://metalheroes.fandom.com/wiki/Golden_Mask_and_Younger_Sister:_The_Yacht_Running_Toward_the_Sun?oldid=41988"
Community content is available under CC-BY-SA unless otherwise noted.